This purports to show that:
1) Our tax system is not progressive (i.e. the rich don't pay outsized tax rates)
2) Tax rates on the rich have declined.

It's not clear what "average" mean here. I'm presuming it's the simple mathematical average: tax rate = sum(all taxes) / sum(all income)
If that's the case, then it's a highly misleading way to try and show the progressiveness of a tax system. The average almost by definition cannot show the progressiveness of a distribution.
Consider the most progressive tax system imaginable:
Top 1%: 50% of income, 100% of all taxes, with 30% effective tax rate.
Other 99%: 50% of income, 0% of taxes, (0% effective tax rate)

This is the most progressive tax system imaginable. So what would EPI's numbers look like?
Top 1%: 30% tax rate
Average: 15% tax rate

That is, in the most progressive tax system possible, comparing the average to the top results in numbers that don't look that progressive! So hat's off to EPI for loading the statistical dice.

There's not much to say here. The EPI is right- when talking about tax share, we should almost certainly include local data. To be fair, the policy debate is about Federal tax policy, but the larger ideological debate is really what matters.

Payroll Taxes - what is a tax?

This is the most conceptually challenging area, and there's no clear answer. The problem is, taxes aren't as simple as adding up what you pay. Why is that? Consider the following thought experiments:

Imagine a world with a flat tax, everyone pays a fixed percent of income (10%). This is neither a progressive, nor regressive system. Now imagine that the government imposes a $5000 poll tax, the most regressive of taxes. But, in a sop to those on the left, it also creates a new "entitlement" which grants every taxpayer exactly $5000.

Under this scenario, every taxpayer is exactly as well off. This scenario may sound crazy, but a) governments do this sort of thing all the time and b) it has big implications for measuring tax share. Under the most naive accounting (EPI's methodology by the way), the system has become much more regressive, since the $5000 poll tax counts as a tax, but the $5000 entitlement is govt spending and not accounted for. But of course, the net effect of this change is nothing! Every taxpayer is exactly as well off as before, but yet the tax system (as measured by EPI) has become more regressive.

This is of course a contrived example. But it happens all the time. For instance, the gov't has raised taxes on everyone to pay for Medicaid, but then turned around and given some (low-income) taxpayers a huge medical benefit worth thousands of dollars. This is largely the same as the example above, except instead of $5000 in cash, the gov't has given (some) taxpayers an in-kind benefit worth $5000. There must be some adjustment for this in the tax share, otherwise tax share gets totally distorted by in-kind and non-tax benefits.

Or consider what happens if instead of giving each Taxpayer $5000, it gives that $5000 to the taxpayer the next year (plus interest). Now taxpayers are essentially giving the government a loan and getting paid back with interest the next year. How does that impact tax share? What if instead of a 1-year loan, you loan the money to the government until you turn 65? That's essentially what Social Security and Medicare are. What's the proper way to account for that?

SS and Medicare are of course more complicated than that, but those complications make the system more progressive.  As one final thought experiment to see just how meaningless "tax share" can be, imagine that the Bernie Sanders administration decides to make SS & Medicare benefits completely independent of contributions.  That is, everyone gets the same benefit regardless of what they've contributed.  President Sanders has made the US system more progressive, but now SS & Medicare payroll taxes are really pure taxes, not tied to any sort of future benefit (since those benefits are guaranteed).  My previous analysis breaks down- there's no reason to exclude these taxes when computing tax share.  After this change which makes the overall system much more progressive, the measured "tax share" seems more regressive!  Clearly "tax share" is not a meaningful metric for measuring the progressiveness of a tax code.

A true measure of tax share would be taxes paid net of direct benefits received. This  is fiendishly difficult to do. It probably makes sense to try and ignore those taxes most directly tied to benefits. Fortunately in the US system that's made easier since they are broken out as explicitly.


SS and Medicare benefits are highly progressive (they transfer wealth from the rich to the poor).  Ending SS & Medicare would make the US system much more regressive, but counting them as a pure tax liability makes the system seem less progressive, which is exactly EPI's goal.

The simpler approach is to just remove SS and Medicare taxes from the mix. This still doesn't account for those programs progressiveness or for things like Medicaid, but it's at least a lower-bound on the progressiveness of the tax system. 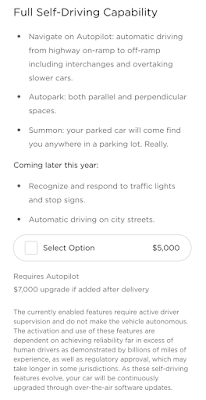 I've written down my predictions for the upcoming Tesla autonomy event.  Writing these things down helps codify your thinking.  Making it public helps keep you honest. Right or wrong, I'll learn something important come April 22rd.

No features will be tied to HW 3.0.They announce the HW3.0 switch over- probably starting in Q3.
[Updated 4/7, H/T @ElmerFUDD] - it appears they may already be making some cars with HW3. Perhaps the 4/22 date gives them 3 weeks to clear out older cars before announcing the new HW?The game will be to announce L2 features and pretend like L4/L5 equivalents are coming soon.We will not see the legal disclosures. Elon will largely promise the world, but when things launch all liability will be on drivers.Tesla Network is back, but in the vaguest possible way.They will demo something every AV could do 4 years ago, except it's not reliable enough to actually do L4/L5.
The State of Play Before we dive into the predictions, we need an o…
Read more 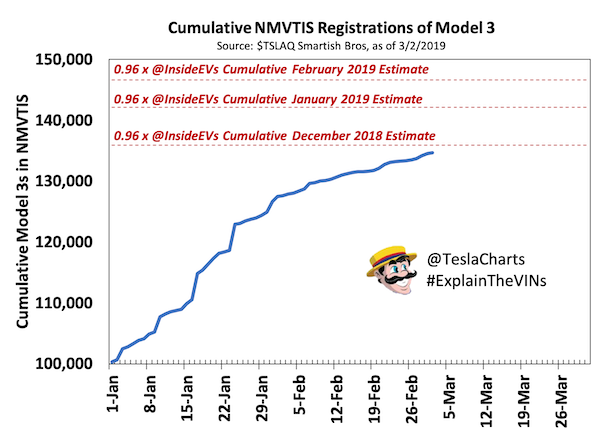 [Updated 2/6/2019 with fresh legal data. See below]
If you're a Tesla bear and haven't read Bad Blood, well stop reading this and go get yourself a copy. It's a great read, but I suspect in a year or two when "Disorder of Magnitude- The Elon Musk Story" (h/t @ElonBachman) comes out it'll make Theranos seem like Sesame Street.

In the wake of the SEC & 35K announcement many bears think the end is nigh. I'm skeptical of that, but it's a good time to clarify my thoughts and put down my guesses as to what's really going on at Tesla. Hopefully in a year or two, we can look back and see how accurate or wildly inaccurate my inferences were.  I should add that my track record here on what's going with Tesla is not great, but you only hit the pitches you swing at.

In this, the first of two posts, I'll explain the "VIN Gap", what it means, and why I think Tesla has acted as it has.

November 24, 2018
The only folks more prone to rants than myself are Tesla fans talking about neural nets. So I thought, why not combine the power of the rants? I'll rant about Tesla fans ranting about the power of neural nets! To get myself good and wound up, I listened to a recent Tesla Daily Podcast about Full Self Driving (FSD) and Neural Nets. Go ahead, listen to it.  I'll wait. It's actually not that bad. "Jimmy D" is the guest and he talks with some authority about neural nets. He doesn't get anything terribly wrong on the basic tech. Everything he says about how Tesla plans to exploit it seemed reasonable to me. If you are a Tesla skeptic, it's a good way to understand Tesla bull thinking.
Of course, like everyone else who's familiar with the AV space, I think Jimmy is 100% wrong about Tesla's prospects. He's a typical Tesla fan- smart, technically savvy, and without any detailed domain knowledge. He's drawn in by the surface logic of Tesla's a…
Read more